Between October 2012 and February 2013, a second period of field work in Benin and in Cote d’Ivoire was carried out. The core activities during that period include the implementation of the baseline survey in Cote d’Ivoire, a participatory community base survey in Benin, and data analysis and writing of my first paper. 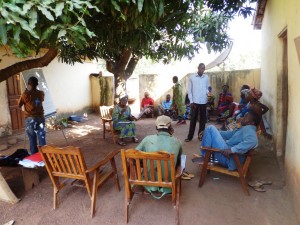 The community base survey in Benin includes four focus groups discussions in four different communities with 55 rice farmers affected by R. fistulosa problem. Data was collected in Loule 1 (Dassa commune), Sonsoro (Kandi commune), Koukoua (Boukoumbe commune) and Tiele (Tanguieta commune). The data collected have been processed (translated and transcribed), the first stage analysis done and a report is available. Preliminary results of the participatory survey in Benin show that farmers perceive the R. fistulosa problems as a real threat for rice production in Benin and they have many endogenous coping strategies.

In November and December 2012, I have trained two MSc students  in Cote d’Ivoire to collect the baseline survey data. With support of Dr Louise Ankanvou of CNRA Cote d’Ivoire, the two students have collected and entered the data. The data cleaning is on-going under my supervision.

I have refined the modelling analysis of my first manuscript to take into account additional relevant variables. The paper describes the “modelling of R. fistulosa infestation and farmer ability to cope with the severity of the infestation”. We conclude that the infestation and the severity of infestation are influenced by specific agro-ecological, agronomics and socioeconomic factors. From the results, we can infer that farmers could better control the R. fistulosa problem by adopting good agricultural practices.

I am currently performing efficiency analysis of rice farmers and factors affecting their efficiency. In March 2013, I will spend two weeks in Cote d’Ivoire to support MSC students in data analysis and writing of their thesis. Furthermore we will work on refining the Tanzanian baseline survey data needs. To improve the dataset and subsequent analysis the dataset requires re-structuring, and data will be re-entered in Access software.