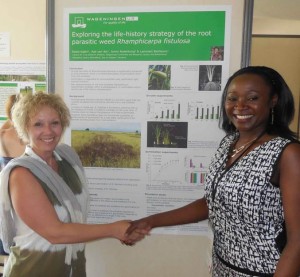 During the recent EWRS (European Weed Research Society)-symposium on ‘Weed Management in Changing Environments’ held in SupAgro, Montpellier, France, from 23-26 June 2015, Stella Kabiri was awarded the prestigious best-poster-award. The title of her poster was: ‘Exploring the life-history strategy of the facultative root parasitic weed Rhamphicarpa fistulosa’. In her poster, co-authored by Aad van Ast, Jonne Rodenburg and Lammert Bastiaans, Stella presents outcomes of a combination of pot and Petri-dish experiments and a simulation study, on the life-history strategy of the facultative parasitic weed R. fistulosa. Previously it was established that, contrary to what is found for obligate parasites like Striga spp., the facultative parasitic weed does not require host root exudates for its germination. The novelty of the research of Stella is that she investigated whether germination of the parasite is perhaps enhanced by root exudates. In pot experiments, she demonstrated a five times higher seed production rate of the parasitic weed when attached to a rice host plant. In Petri-dish experiments she then demonstrated that, despite this fitness advantage, seeds of the parasite where not at all stimulated by root exudates of the rice host plant. Finally, a simulation study was conducted to explore the logic behind the experimental outcomes. This study revealed that, depending on relevant plant traits and environmental circumstances, the opportunistic strategy of this facultative parasite is indeed superior over a strategy where the parasite just postpones its germination until a suitable host plant appears. The outcomes of the study will be used as a basis for developing and improving suitable strategies for managing this relatively new parasitic weed species.

On the picture you can see Stella, in front of her poster, being congratulated by the chair of the International Jury, Dr. Garifalia Economou.