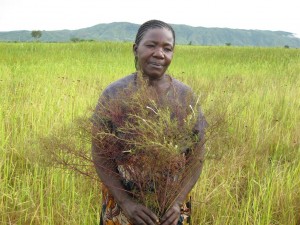 Please check out this article in Plant Life, news letter on plant sciences of Wageningen UR in which Lammert Bastiaans sheds his light on the growing problems of Rhamphicarpa in different parts of Africa.

A major parasitic plant that is thriving in relatively humid low-lying countries in Africa is Rhamphicarpa fistulosa. Rhamphicarpa fistulosa is at home in boggy fields where it finds plenty of potential victims in the form of rice plants. Like Striga, the plant can destroy entire harvests.

Rice is developing into an increasingly important food crop in Africa, fast replacing traditional crops. A growing number of people are moving to the cities, where they look for food that can be more quickly prepared than traditional products such as sorghum. This has boosted demand for rice, and thus the number of farmers growing this crop in the low-lying countries in Africa. At the moment, farmers are only using a relatively small part of the so-called inland valleys, but these regions will be strategically important for future rice production.

Lammert Bastiaans, senior university lecturer in Crop and Weed Ecology at Wageningen University, has spent the past year studying the increasingly common plant parasite with his team, which includes several PhD students from Africa. “Rhamphicarpa is a growing problem for rice production in many of those low-lying areas,” he says. “In the inland valleys of Benin the amount of agricultural land infected by Rhamphicarpa rose from 30 to 55 percent between 1998 and 2007.” On average farmers estimate the yield reduction as a result of Rhamphicarpa infection to be approximately 60 percent, although losing an entire harvest is by no means exceptional.

In contrast to Striga, Rhamphicarpa can live without a host, although it remains much smaller. Life as a parasite has many benefits for the plant: It grows much better when it steals substances, water and nutrients from a host. Despite the increasing problems with Rhamphicarpa, very little is known about this parasite. For a more effective control, Bastiaans’ research is focused among other things on the interaction between parasite and host plant. Does the species germinate whenever a host plant is nearby, like Striga? If so, what signal substances are involved? Bastiaans is also interested in the cause of the damage to the host plant. Is it a result of the parasite extracting nutrients from its victim, or is there another pathogenic effect, similar to the way Striga deregulates the photosynthesis of its host?

In addition to acquiring fundamental knowledge about the parasite, the research team is also looking into measures to limit the damage caused by Rhamphicarpa that can be locally applied. Nutrient-poor soils are more affected by Rhamphicarpa infection, yet factors such as the sowing season and rice variety also play a role. Fertilisation could help reduce the chances of the parasite as it would make the host plant larger and stronger. This would literally and metaphorically put the parasitic plant in the shade.

One of the current problems in some African countries is that farmers increasingly have to wait with sowing due to delayed rainfall, and the parasite has a greater effect on crops that were sown at a later date. Bastiaans wants to find out exactly how important the sowing season is to the level of infection. Another dilemma is that the popular and tastiest traditional rice varieties produce less than modern varieties and have a longer growing season. This makes them more susceptible to Rhamphicarpa infection. “Maybe with intelligent cross breeding we can develop new hybrids that combine the advantages of traditional and of modern varieties: good taste, short growth time and higher yields”, concludes Bastiaans.

The article is also available in Dutch.