In the evening of Monday 7 July 2014, Jonne Rodenburg had a talk on “Multi-disciplinary and multi-stakeholder approaches in crop protection – the case of parasitic weeds in rainfed rice systems in Africa” as part of the seminar series “Tropenzentrum Invites” of the Centre for Agriculture in the Tropics and Subtropics, University of Hohenheim.

Tropenzentrum – wants to promote development oriented, interdisciplinary research, strengthen communication, networking and consultancy and support capacity development within and beyond the university. For the seminar series “Tropenzentrum invites” they invite interesting speakers, researchers, development workers, representatives of development or other related agencies to give us a talk on their insights, perceptions, experiences in different topics related to tropical and subtropical agriculture and development cooperation. The seminar is open for students and lecturers of the university.

Jonne presented some background on the work of the Africa Rice Center and on rice in Africa, followed by some explanation of the parasitic weed problem in rice. This was then followed by a presentation on the PARASITE project, with an emphasis on its multi-disciplinary and integrated character (see figure below). 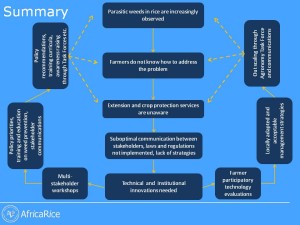 The presentation was followed by a discussion, during which some interesting questions were put forward. One of the questions was why there is still no good control against parasitic weeds after decades of intensive research. Someone else wanted to know if we could not propose technologies to rice farmers that were proven effective in maize or sorghum. Another interesting question was why the parasite would kill its own host as this would not be in its own favor.

I explained that the decades of research on control options against parasitic weeds had focused primarily on technological solutions without sufficient considerations for the context of the problem. This has led to solutions that are technically sound and effective but not always relevant and applicable or available to the smallholder farmers that typically deal with the problem. Another point is that the institutional context should be considered when developing and promoting technical solutions. I explained that these considerations had led us to the initiative of the PARASITE project with the selected integrated approach and that one of the objectives of our work is to get to acceptable and affordable solutions for smallholder rice farmers.

The question as to why the parasite would kill its host was answered from a historic perspective. Before the modern-day intensified agriculture parasitic plants such as Striga spp. and Rhamphicarpa were probably part of the natural vegetation or appeared in situations with mixed crops or crop rotations. Such situations are characterized by a non-uniform and relatively low density of suitable hosts. The parasites developed a successful reproduction strategy, with high a seed production to increase the chance of finding a suitable host in the next cycle. The hosts in the natural vegetation may have co-evolved with the parasitic plants and developed a level of tolerance. Under the current intensified systems the host density is much higher and more uniform, increasing the chance for a parasitic plant to successfully parasitize a host, and the hosts are now (modern) staple food crops that have been developed by breeders with the aim to maximize yield and resource-use efficiency rather than parasite tolerance. This has led to the current situation where the parasitic plant strategies are too successful and the host (cereal crop) is too sensitive. A second issue is that the parasites do not need the host plant during the whole life-cycle. After attachment and vegetative growth the parasite is more or less independent from its host. Even if the host then dies, the parasite can continue its life-cycle and produce seeds.

The presentation can be found here.