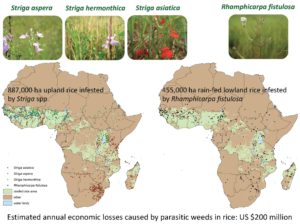 The paper is one of the outputs of the PARASITE-project. The paper presents a method for estimating the economic impact of parasitic weeds in rice in Africa. Data on regional distribution of the four most important parasitic weeds in rice (Striga hermonthica, S. asiatica, S. aspera and Rhamphicarpa fistulosa) were obtained from herbaria. Collection locations of the species were combined with a spatial distribution map of rainfed-rice production areas. The probability that a rainfed-rice growing area is infested with a particular parasitic weed species was inversely related to the distance between the area and the closest observation of that parasitic weed. Estimates from this spatial analysis and secondary data on the loss inflicted by the parasite and the efficacy of weed control were then combined into a stochastic impact assessment model, to generate a confidence interval of the likely economic impact per country and for sub-Saharan Africa as a whole. Our model predicts that the most likely economic loss inflicted by all parasitic weeds in rice in Africa is an estimated US$200 M and increases by US$30 M annually. Targeted investments in research, development and capacity building are needed to reverse this trend.

The paper is published as Gold Open Access and can be freely downloaded at this link: http://www.sciencedirect.com/science/article/pii/S016788091630528X. The highlights of the paper are: