In January 2012 I started my MSc thesis research within the Parasite Programme. My research focussed on the reproductive success of the parasitic weeds Striga asiatica and Rhamphicarpa fistulosa. In particular, I explored how the reproductive success was affected by different rice sowing dates, rice varieties and parasitic weed seed densities. The first two aspects were studied in two field experiments in Kyela, Tanzania. For these experiments I counted the number of weeds biweekly. From reproduction onwards also the number of flowers and capsules were counted. These counts led to some interesting results. Both parasites were clearly affected by the rice sowing date, but in an opposite way. For S. asiatica the least plants and so the least seed capsules were found in the latest sown plots. Whereas the least R. fistulosa plants and so least seed capsules were found with early sowing. This seemed to be related to the rainfall pattern in Kyela. After the rainfall, the S. asiatica seeds become pre-conditioned, sensitive to germination stimulants from the host rice plant. So if the rice is sown at that specific moment, lots of Striga seeds will germinate and emerge. On the contrary, de-synchronisation of conditioning and germination stimulants (by later sowing of the rice) will led to less emerged Striga plants. 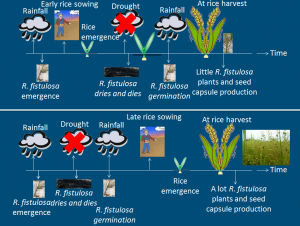 On Monday 28 January 2013 I presented these results during a short colloquium. The hand-out of the presentation has been posted on this website (follow link to access). The colloquium marked the end of my MSc Biology. I will graduate in a couple of weeks and currently I am looking for a job. For more information regarding my research, or for questions and feedback, please contact Djoeke Langeloo.

I would like to thank my supervisors Jonne Rodenburg (AfricaRice), Lammert Bastiaans (WUR) and Aad van Ast (WUR). But also Stella Kabiri and Mwalimu Menza since my MSc-research was part of PhD-project 1 and PhD-project 2, respectively.