Field visit to the experimental sites in Kyela

From 11 to 17 May 2014, Lammert and Aad visited Tanzania. The main purpose of this trip was to visit Kyela, where Dennis is conducting field experiments for his PhD. In Kyela, the experiments are laid out at two sites: one infested with Striga asiatica and a very similar second site, at a slightly lower altitude, infested with Rhamphicarpa fistula. 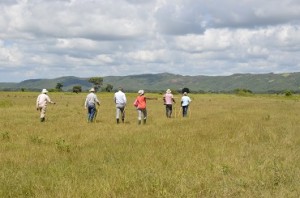 At both sites three nearly identical experiments are maintained. In the first experiment the effect of sowing date, in combination with the use of short, medium and long duration varieties, is investigated. The second experiment focuses on the use of different soil amendments and in the third experiment a broad range of varieties is screened for resistance and tolerance against the two parasitic weeds.

We were very impressed by the excellent state of the experiments. Obviously, the team of AfricaRice is very experienced in conducting this kind of experiments and Dennis is profiting a lot from their expertise. Whereas the infestation rate of S. asiatica was mild this year, the infestation of R. fistulosa was impressive. Some of the earlier sown plots were already harvested, but it is clear that Dennis will have a lot of work in the coming months. We are confident however that, with the help of the AfricaRice team, he will bring this activity to a good end.

We also took the opportunity to have a look at the farmer’s fields in the close surrounding of the experimental sites. Dennis guided us around. The infestation levels varied a lot, but also here many fields were severely infested with R. fistulosa, clearly reflecting the importance of this newly developing parasitic weed species. These observations confirm that our PARASITE-project is well timed, and really can contribute a lot in helping resolve a rapidly evolving problem.

Back in Dar es Salaam, after an exciting trip, we discussed with both Stella and Dennis and their local supervisors, the progress in their thesis research. Stella is working hard on her second paper, after the first got accepted by Weed Research (congratulations again). With Dennis we discussed at length the plans for on-farm trials in the next cropping season. This will mark an important next stage in the PARASITE-project, where farmers will not only have a look and form an opinion about the treatments included in our field trials, but are also challenged to try out some of the proposed control strategies in their own field.