As part of the PhD project of Dennis Tippe, participatory field trials on acceptable technologies against the parasitic weeds of rice are being conducted in Kyela, Tanzania. It was a continuation of the technology evaluation and selection done by farmers on Striga asiatica and Rhamphicarpa fistulosa management during 2012, 2013 and 2014. Rice farmers from the two villages of Kilasilo and Mbako in Kyela District (as well as of other neighbouring villages) are facing challenges related to the two parasitic weeds. These farmers have been participating in technology evaluation and selection for the past three seasons. 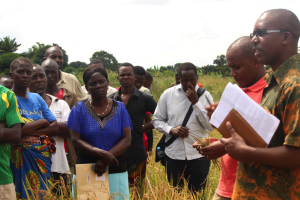 On-farm trials were conducted between December 2014 and July 2015. In both villages, two groups of rain-fed rice farmers participated in the on-farm technology evaluation. The first group (four sub-groups each of five farmers) worked on S. asiatica and the second group of the same size worked on R. fistulosa.

The exercise aimed to employ a participatory approach in generating information on acceptable technologies against the two parasitic weeds. To increase awareness of parasitic weed management options, a Famer Field Day (FFD) was organized on 13th June, 2015. The FFD aimed to get: (i) general background of the stakeholders (ii) their opinions on different technologies tested (iii) which technology they prefer and why (iv) what are the practical constraints of implementing these technologies.

Before visiting the on-farm trials during FFD, stakeholders were briefed about the occasion. After the arrival of the Kyela District Director and all delegates, participants were led to the R. fistulosa field and to the S. asiatcica field. The participants visited all four treatments both at Striga and Rhamphicarpa sites: (i) sowing time (ii) soil amendments (iii) tolerant/resistant variety, and (iv) combination of the three. They also visited farmers normal practice plots to have a better comparison with the new management option tried against the two parasitic weeds. An interview was conducted during the FFD to get farmers’ and stakeholders’ views and preferences.