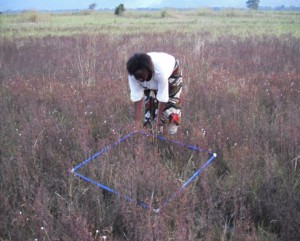 Stella Kabiri has been working on two manuscripts. The first paper is titled, ‘Ecological differences between Rhamphicarpa fistulosa and Striga asiatica in parasitism of rain-fed rice in Sub-Saharan Africa’. This paper describes that both Rhamphicarpa, a facultative parasite and Striga spp., an obligate parasite, have their distribution in similar regions in the continent. Yet rice cultivation has been driven into the marginal uplands and inland valleys that are the preferred ecosystems of these parasitic weeds. A joint effect of which can cause a particularly devastating problem on production, if they occurred in the same rice growing ecosystems. The paper points to one such unique place where both types of parasitic weeds exist in the same rice growing landscape. The area is Kyela, located in the south of Tanzania bordering the shores of Lake Malawi. Here, Striga asiatica is observed in rice cultivated uplands while Rhamphicarpa fistulosa thrives in rice fields situated on hydromorphic and temporary flooded lowlands.

Kyela provided an exclusive opportunity to ascertain the factors that cause these weeds to thrive under field conditions. Such a study is helpful to find out whether the problems with parasitic weeds in rice cultivation in the coming decades are likely to expand. The paper identifies ecological ranges of R. fistulosa and S. asiatica in field environments in a given season, by connecting each parasite’s prevalence to soil condition and associated weed community compositions.

The field study showed clear environments of S. asiatica and R. fistulosa and a fuzzy boundary in between the two parasite’s habitats that did not have clear demarcation for each parasite. Moreover this boundary is more prone to S. asiatica than it is to R. fistulosa. Yet, Rhamphicarpa had a higher coverage in its habitat than S. asiatica had, in its territory. The study also revealed that both R. fistulosa and S. asiatica have distinctly different habitat characteristics moreover there are environmental conditions that may not favour either of these weeds creating a parasite free zone in the rice growing landscape. This confirms what one farmer with a rice field located between Striga and Rhamphicarpa habitats, claimed that he had never encountered problems with either of the parasitic weeds. The species diversity index of associated weed community compositions between the habitats of both parasitic weeds was high showing that the environment was more stable. This indicated  that the rice farmers hardly used herbicides to control weeds or had fewer weeding regimes and cropping sequences. Field observations had confirmed that most rice farmers of Kyela used hand weeding as a weed control measure and have two cropping seasons per year. 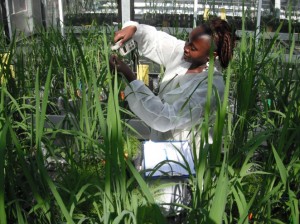 The second paper outlines the consequences of Rhamphicarpa fistulosa infection on host physiology and the parasite’s influence on biomass accumulation and partitioning of its rice host, cultivar IR-64. The host parasite interaction was investigated to determine whether host response is dependent of parasite biomass at different densities of Rhamphicarpa infections, specifically biomass accumulation and grain yield of infected and uninfected rice plants. The results showed that an alteration in architecture of Rhamphicarpa infected rice plants compared to uninfected plants occurred. Rhamphicarpa infection evidently had a negative effect on tiller production, stem height and leaf area of its host, an observation similar to the effects by root hemiparasitic weeds have on host crops. The results also revealed a significant influence of Rhamphicarpa infection on biomass accumulation of its rice host. The amount of dry matter accumulated by the Rhamphicarpa plants from rice was not directly proportional with increment in infection. The parasite also continued to accumulate up to 75-95% of the host plus parasite dry matter throughout the growing period, yet the sum of this dry matter was much less than that of the uninfected rice plants. This implies that Rhamphicarpa has supplementary pathological effects on its host rather than just as a sink of its host dry matter. The reduction in biomass production of the rice host was synonymous with an increasing allocation of biomass fraction to the roots with increased parasite infection. This allocation was at the expense of the shoot system during the vegetative stage and the panicles at maturity. Moreover, the proportion of total biomass per plant partitioned to roots differed between infected and uninfected plants. At maturity it was observed that the smallest infection of Rhamphicarpa (15 seeds/pot) caused up to 90.8 % yield loss of its host, implying that even the smallest infection of Rhamphicarpa could cause a significant effect on the yielding ability of rice and total yield failure.

In conclusion Rhamphicarpa fistulosa has considerable effect on physiology and yielding ability of its rice host cultivar IR64 even with the smallest densities. The paper reveals that once the host parasite association has been established, the parasite can severely affect the physiology and stunt the growth of its rice host, alter host architecture, reduce tiller production and leaf area and lead to processes that result to complete yield failure. Therefore Rhamphicarpa is likely to become a severe problem to rice production in infested areas in Sub-Saharan Africa.

I continue to work on the two manuscript outputs with the intention that in the course of the year they will be submitted for publishing in peer reviewed journals.