Parasite PhD students Stella Kabiri, Dennis Tippe and Simon N’cho joined in the celebration to mark the 50th anniversary of WOTRO Science for Global Development. The theme of the conference WOTRO 50 Years was – Forward Thinking. The conference took place on Wednesday 15 October in the Museum for Communication at The Hague. In particular, the conference focused on the role of social innovation in programming, funding and conducting research that can contribute to solving the world’s most pressing development-related issues. 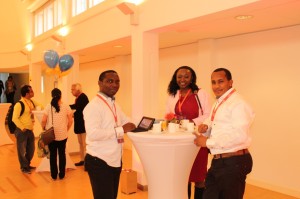 The key note speakers included Heide Hackmann, director of the International Social Science Council (ISSC), presented her views on the importance of social innovation in scientific research. The biggest challenge, according to Hackmann is to solve crises in a way that social equality, safety and well-being are guaranteed. Jan Jonker (Radboud University) a specialist in the field of sustainable development gave a very lively talk and stressed that experts in the field and scientists need to find each other rather than compete with one another. Together they are stronger in forming 'research hubs' – a place where they can meet and share knowledge to solve problems in a more efficient way. Unfortunately, Jan Jonker has no information as whether the idea has been implemented somewhere while it is already being implemented by AfricaRice and its partners in Africa. We remember his amusing comment about “A4 scientists” meaning that scientific knowledge can be better shared beyond scientific publications. Jan also presented a  Triple sadness and fish bowl paradigm where the former, simply meant that there is knowledge’s among the people but not organized enough to solve their problems, so scientists need to link with societies in solving these existing problems. The Fish bowl paradigm showed one fish jumping from one bowl only to land in another. This in simple terms was to illustrate that, before working for the future there could be more opportunities currently among us to work on and it is not always that changes take place at once but gradually. WOTRO 50 Years also brainstormed on trans disciplinary research, research deliverables, assessing research proposals and evaluating research as workshops. The conference was closed by Christian Rebergen from the Dutch Ministry of Foreign affairs, who presented the winners of the Battle of ideas with a 6000 Euros for the winning idea -Back to the Basics: establishing a trade by barter food network with dried fruits and vegetables in Nigeria. Other ideas included ‘Solar powered street light as a solution for burglaries in Kabwe, Zambia’ and ‘Torre faction technology for income generation in rural Indian communities’.

Josh Maiyo, a PhD student from VU University Amsterdam and Research at Makerere University, Uganda suggested that to improve the collaboration between WOTRO and its research partners from developing countries they should be closely involved in designing collaborative research projects at the early stage. The Parasite PhD students also met with Wiebe Bijker, Professor of Technology and Society and the Chairman of the board of NWO-WOTRO (see second photo).