This study reports on the existence of resistance and tolerance against Rhamphicarpa fistulosa as well as on yield levels and relative yield losses incurred under R. fistulosa infested field conditions among a range of adapted lowland rice varieties. The facultative parasitic weed Rhamphicarpa fistulosa, is a widespread problem in rain-fed rice production systems in Africa. Little is known about rice varietal differences in infection level and yields in fields infested by this root hemi-parasite. During three cropping seasons (2012–2014), an experiment was conducted to address these knowledge gaps and to identify suitable variety selection criteria for R. fistulosa resistance and tolerance. Sixty-four adapted lowland rice varieties, including all interspecific lowland varieties of NERICAs, their most common parents – IR64 and TOG5681 – and two locally popular varieties – Mwangulu and Supa India – were grown in an R. fistulosa-infested field in southern Tanzania. 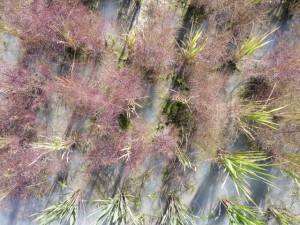 These varieties would be invaluable for future rice breeding programs. For farmers in R. fistulosa-endemic areas the most promising varieties are probably NERICA-L-40 and -31, as they combine good yields under infested conditions with low levels of parasite infection.

The paper can be downloaded here.