I am a student of Utrecht University and started the research for my MSc thesis at Wageningen University in March 2012. I plan to finish my thesis in January 2013.

The focus of my research is the mutual interaction between the parasitic weed Rhamphicarpa fistulosa and its host, rice (Oryza sativa). During my thesis research I conduct two pot experiments, one at Wageningen University, the Netherlands and one at AfricaRice, Tanzania. In Wageningen I am supervised by Lammert Bastiaans and Aad van Ast. In my first experiment I focus on the effect of parasite inoculation time on host growth and photosynthesis. The objective is to assess the effect on rice growth when parasite inoculation and therefore attachment occurs at different life stages of the rice plant. Rice plants may show different levels of sensitivity to parasitism, depending on their developmental stage. The negative effects of the parasite might be more severe in a younger rice plant at the very early exponential growth phase than in a slightly older and taller rice plant that has already accumulated a certain biomass and therefore a certain ‘resilience’. In the field, certain cultural practices could possibly delay infection time. It is therefore important to get an indication how sensitive rice plants are to infections at different developmental stages. Next to the effect of the parasite on host growth, the effect on host photosynthesis is studied. 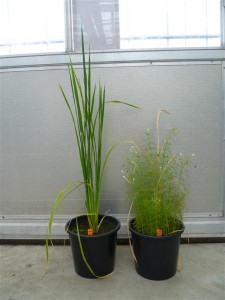 The greenhouse experiment was carried out between April and July 2012. The treatments included two different inoculation times, one parasite density and the respective controls for both rice and Rhamphicarpa. A first look at the data indicates that the parasite has a negative effect on height and leaf area of rice as well as on aboveground dry weights of rice. In accordance with that, Rhamphicarpa grows taller in the association than in the monoculture. In addition to that, the rice plants infected with Rhamphicarpa have a lower maximum net photosynthesis rate compared to uninfected rice plants. A detailed analysis of the data has to follow. 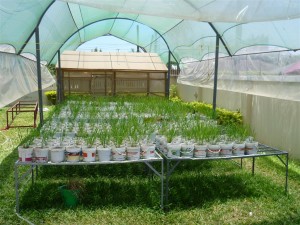 In Dar es Salaam I am supervised by Jonne Rodenburg. The objective of the second experiment is the same as outlined for the first experiment. In addition to the treatments of the first experiment I included one more inoculation time and one more parasite density, resulting in a total of three different inoculation times and two parasite densities. I started with the experiment in August 2012. The rice is growing well but the growth of the Rhamphicarpa is slower than expected so I was not able to start with the destructive harvests yet.

In December I will return to Wageningen and finalize my thesis. For more information regarding this study please contact Stefanie by sending an email to s.pflug@students.uu.nl.