For his MSc thesis at the Crop and Weed Ecology group of Wageningen University Luuk van Dijk set up two rice pot experiments. The objective of these experiments is to understand whether crop-weed competition in rice is affected by the co-existence of a root parasitic weed. 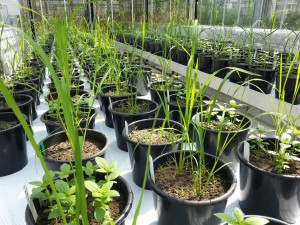 This objective resulted from observations done in 2013 in experiments at the trial fields of AfricaRice in Kyela, Tanzania. In fertilizer experiments with rice and parasitic weeds one observed less ordinary weeds in plots infected with  Rhamphicarpa fistulosa compared to plots without the parasite. Late mergence and suppression by ordinary weeds in a later stage was observed in plots infested with Striga asiatica. Since these observations were not studied yet it was an interesting topic for a MSc thesis research.

A ‘de Wit replacement experiment’ design is used for the rice-weed competition. As assumed that one rice plant can be replaced by three ordinary weed plants (Mitracarpus villosus) the following plant combinations are used in the pots: rice-rice, rice-weed and weed-weed. Additional pots with only one rice or weed unit were added as a control in both experiments. Three different infestation levels of the parasites Rhamphicarpa fistulosa or Striga asiatica are used as treatment in the pots. In the Rhamphicarpa experiment control pots with parasitic plants only were added as an extra control.

Currently, around 35 DAS, Striga asiatica can emerge every moment. Data of the total plant biomass harvested around July/August will be analysed afterwards.