Damien Lenglet is an Erasmus student in Wageningen since February 2012. He started his internship at the Crop and Weed Ecology Group in May and will finish on August 31. Damien pursues an MSc in Crop Science in Anger (France) at the Ecole Supérieure d'Agriculture (ESA). During his internship he is supervised by Aad van Ast and Lammert Bastiaans.

Rhamphicarpa fistulosa is a facultative parasitic weed species. An important implication is that seedlings will emerge and establish and only after that will connect to their host plant or not and, in this case, continue their lifecycle as an independent growing plant. Determining, in a non-destructive manner, whether a Rhamphicarpa seedling has already managed to attach to its host plant is nearly impossible. What often is observed however is that weed seedlings, once they are attached, grow much faster and also much taller than the seedlings that are not attached. In theory, comparing a height distribution of a Rhamphicarpa seedling population in the presence of a host plant with the height distribution of a population in the absence of a host should provide a reasonable estimate of the fraction of attached weed plants. Damien in his study focuses on this problem and attempts to establish whether the height of Rhamphicarpa fistulosa is indeed a reliable indicator for the presence of a connection between the parasitic weed and the rice plant. 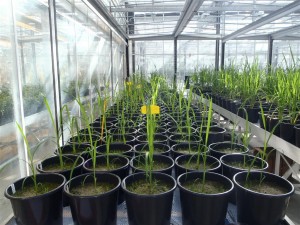 The basic idea behind the study is to spray the host plant with a systemic herbicide. Shortly before spraying, height will be used to estimate for each individual Rhamphicarpa plant whether it is connected or not. After the herbicide is transported within the host plant it is expected that only the attached weed plants will be affected and get killed. In this way, the reliability of height as an indicator for the presence of a connection can be evaluated. In the pot experiment rice plants of cv IR-64 are used. Pots with rice and Rhamphicarpa are raised, together with control pots with Rhamphicarpa alone.  The experiment is set up as a RCBD with three factors: herbicide, herbicide concentration and time of application. After a literature review glyphosate and an Imazamox like herbicide were selected. By August, Damien hopes to have a good indication on how reliable plant height is as an indicator whether Rhamphicarpa is or is not connected to its host.