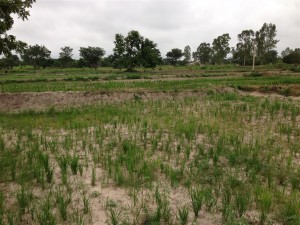 Key stakeholders representing farmers, government, civil society, private sector, and research and training were interviewed at Department and Commune level. Over 45 stakeholders were interviewed at the three field sites, and another 15 stakeholders were interviewed at the national level. During the two intensive weeks, we managed to get a good overview of the institutional environment of crop protection, agricultural extension and rice farming in Benin. We learned that there is limited access to agricultural inputs for the production of cereals (such as rice), and that most rice farmers purchase their inputs on the ‘informal’ market. The government crop protection and extension services mainly focus on supporting the cotton sector, and have limited attention and resources for promoting the other (food) crops. Similar to what we found in Tanzania, Rhamphicarpa fistulosa is unknown to the majority of extension and crop protection officers at Commune and Department level, and not seen as a big problem for farmers.

During the fieldwork, we prepared three multi-stakeholder workshops that will take place on 19, 23 and 26 August 2013. For the workshops we invited a good mix of stakeholders which we will facilitate in their analysis of the agricultural sector in Benin.